In the spirit of Kingian principles of non-violent social change pioneered by Rev. Dr. Martin Luther King, Jr., this webpage presents a legally-defensible case to abolish an altered state of slavery by addiction and incarceration of persons using marijuana while offending - nearly 15% of those under the control of the criminal justice system. Legalization of marijuana merely helps pot businesses while contributing to the costly cycle of violence, drug abuse-related mental illness, crime, and exploitation promoted by unconstitutional anti-controlled substance marijuana laws and ballot measures that are too costly for citizens Marijuana businesses, pot plantations and drug dealers who are personally liable to citizen victims irreparably harmed under the appearance of lawfulness by those who systematically ignore the federal Food and Drug Administration approved cannabis pill process. The FDA protects citizens from hundreds of harmful interactions marijuana has with other drugs and many "dangerous" interactions.

State marijuana anti-controlled substance legalization laws clearly violate federal criminal law, health law, and constitutional Equal Protection, Due Process, and Supremacy Clause law - as well as federal racketeering laws, banking laws, and state drug dealer liability act laws. Just as the Supreme Court found racial discrimination perpetrated by the Topeka Board of Education caused by an "inherently unequal" state laws state anti-controlled substance marijuana laws rip right through equal protection of the FDA laws. The illegal state action must be challenged as a civil rights violation for a failure to protect public health and safety and constitutional rights equally across state lines in the same way that the Plaintiff in Brown v. Board of Education of Topeka won at the U.S. Supreme Court. As citizens understand and protect their legal rights, the outcome of this battle against illegal and catastrophic anti-controlled substance marijuana laws will have a decisive impact on education, respect for the law and freedom for the youth of the Americas.

Advocates Legal Services envisions the end of "legalized" uncontrolled marijuana V.I.C.E. -- Violence, Illness (mental and lung as with tobacco), Crime, and Exploitation (economic fraud, sexual assault, elder and child abuse and neglect). Stand together in non-violent social change, to save lives where there are dangerous drug interactions with marijuana ignored by non-FDA-approved state laws and where marijuana promotes the cycle of domestic violence marijuana / drug lethality factor in domestic violence cases, and Abolish Reactive Marijuana-Related Slavery (A.R.M.S.) today. The 13th Amendment rule against slavery - having a little known exception for the "duly convicted" - will be consumed by the exception more and more in many of America's most distressed communities if the state marijuana legalization laws are not found unconstitutional. The state marijuana legalization laws of the modern era rip right through FDA rules, racketeering and drug dealer liability act laws, as well as the U.S. Constitution's Due Process / Equal Protection / Federal Supremacy clauses.

"We hold these truths to be self-evident, that all men are created equal, that they are endowed by their Creator with certain unalienable Rights, that among these are Life, Liberty and the pursuit of Happiness." - Declaration of Independence

Through educating youthful citizens and residents of all ages about their rights and responsibilities, each responsible adult can teach youth and their families about the critical need to avoid getting in trouble with the law, to think differently, to avoid bad influences from friend or foe, and to act with civility and respect for the law. When you change your mind, you can change your world and realize your dreams.

The debate about constitutional "slavery" for the "duly convicted" that is a stigma that is almost never discussed is worth having if it creates more knowledge of the constitution, less chronic disproportionate minority representation in the criminal justice system, more freedom and liberty for all.

The U.S. National Institutes of Health (NIH) states that marijuana, with its mind-altering THC chemical, is the most common illicit drug in America used by 11 million young adults in the past year. Pot use increases the risks of legal liability associated with slow response times when in physical or legal danger, or in cases of distracted driving citations, DWI accidents, and illegal behavior or disorderly conduct charges. Pot use can also destroy families, according to legal advocate Isaac Adu. He states pot is like burning bridges with one’s family with an accelerant. Grassroots Detroit homeless advocate A. Poellnitz counseled thousands of homeless individuals and families. She concluded that burning family bridges - not poverty - is the major cause of homelessness. Poverty is not injustice but pot use in the family home is usually an unjust encroachment on the rights of others to live free from the smoke and foul pot odor. Winford Bailey says all families are dysfunctional in a way; pot makes it worse.
Top maternity doctors trained at the Detroit hospital affiliated with the Midwest's only branch of the NIH daily warn pregnant women to stay away from alcohol and illicit drugs like marijuana due to the permanent damage drugs can cause to their babies' brains. Too many marijuana users show up at Michigan clinic appointments so high that the doctor has to repeat a simple question two or three times for the patient to understand or answer the question. Imagine five years later, the child exposed to marijuana in utero tells his mom who has marijuana use disorder that he is hungry. She just points to the kitchen and replies, "There's a can in there." The doctor told the mom when she was using marijuana while pregnant that she should not ask why Johnny cannot add two plus two in grade school. Marijuana exposure while in utero is the cause of the child's permanent brain damage.

NIH: How Does Marijuana Affect a Person's Life?

NIH reports that compared to those who don't use marijuana, those who frequently use large amounts report the following:  lower life satisfaction; poorer mental health; poorer physical health; and more relationship problems. People also report less academic and career success. For example, marijuana use is linked to a higher likelihood of dropping out of school.18 It's also linked to more job absences, accidents, and injuries.

ARMS welcomes the marijuana law debate to reduce pot-related damage to society. This debate will continue after the next ballot measure. Vast marijuana harms include increased risk of health hazards and early entry into the altered state of slavery in prisons under the "duly convicted" clause of the anti-slavery amendment exception in the Constitution. The historic incarceration rates are affected by constantly growing numbers of people damaged by reported marijuana use causing untold social and public health instability. The only economic gainers of legal pot are those in the marijuana business. Marijuana is a money pit for the rest of society. To fight for freedom we need to be vigilant, ever cognizant of the societal devastations marijuana presents.

To protect health, safety and reduce marijuana drug user spin-off crime and mass incarcerations, laws must prohibit marijuana acording to federal law. The spread of marijuana plantations is a catastrophe. The USA's major economic rival and the principal repository of thousands of former Midwest manufacturing jobs exported abroad, China, smartly outlawed marijuana decades ago. Since doing so, they became the world's second greatest economic power and, according to one measure in mid-2016 were temporarily ranked the world's largest economy.
Due to the drug crisis in the USA, the lives of Americans and their sacred fortunes are in a perilous place. Legalizing marijuana endangers quality of life. The foul odor and hazards of marijuana smoke alone are as bad or worse than tobacco; the altered mental state pot use causes undermines personal security, civic freedom, shared stable economic opportunity, and family stability. Protect those at risk, including vulnerable crime victims, children and youth, from new predatory pot plantations. Marijuana use is a lethality factor in domestic violence cases and prison slavery facilities where deaths occur too often. Marijuana legalization shreds the fabric of the American ideals of peace, tranquility and happiness.

After 5 Months of Sales, Colorado Sees the Downside of a Legal High 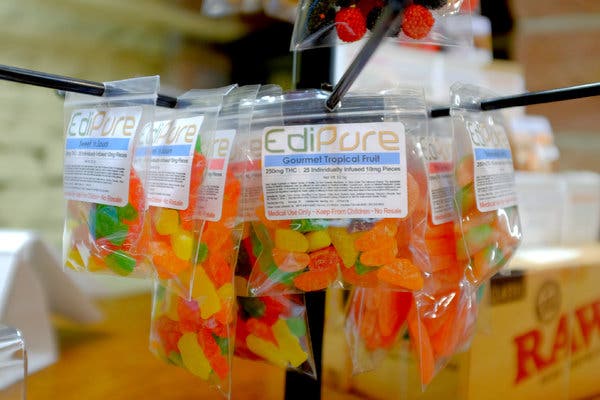 Edible marijuana products in Denver. Some worry that recreational goods, sometimes brightly packaged, are finding their way into children’s hands.CreditMatthew Staver for The New York Times

Law enforcement officers in Colorado and neighboring states, emergency room doctors and legalization opponents increasingly are highlighting a series of recent problems as cautionary lessons for other states flirting with loosening marijuana laws.

There is the Denver man who, hours after buying a package of marijuana-infused Karma Kandy from one of Colorado’s new recreational marijuana shops, began raving about the end of the world and then pulled a handgun from the family safe and killed his wife, the authorities say. Some hospital officials say they are treating growing numbers of children and adults sickened by potent doses of edible marijuana. Sheriffs in neighboring states complain about stoned drivers streaming out of Colorado and through their towns.

1. A third of the parents in state prison reported committing their current offense while under the influence of drugs. Parents were most likely to report the influence of cocaine-based drugs (16%) and marijuana (15%) while committing their crime. About equal percentages of parents in state prison reported the use of opiates (6%) and stimulates (5%) at the time of their offense, while 2% used depressants or hallucinogens.

2. Thirty-two percent of mothers in state prison reported committing their crime to get drugs or money for drugs, compared to 19% of fathers.

4. Marijuana (10%) was the most commonly used drug among probationers at the time of the offense.

5. Two-thirds of Driving While Intoxicated (DWI) offenders on probation reported using drugs in the past. Among DWI probationers, marijuana (65%) and stimulants (29%) were the most commonly used drugs.

6. Seventeen percent of those on probation reported drug use in the month prior to arrest.

Prior drug use reported by probationers

Level of prior drug use

DWI offenders or Other offenders

7. Of those inmates held in local jails, only convicted offenders were asked if they had used drugs in the time leading up to their current offense. In 2002, 55% of convicted jail inmates reported they had used illegal drugs during the month before their offense, unchanged from 1996.

8. A higher percentage of jail inmates in 2002 than in 1996 reported regular drug use (used drugs at least once a week for at least a month).

11. Although the proportion of federal prisoners held for drug offenses dropped from 63% in 1997 to 55% in 2004, the percentage of all federal inmates who reported using drugs in the month before the offense rose from 45% to 50%.

Percent of inmates who had ever used drugs

13. Percent of parents in state prison who used drugs in the month before the current offense, 1997:

15. Among youths aged 12 to 17, the rate of substance dependence or abuse among males was not different from the rate among females in 2011 (6.9 percent for each)."

20. Children with Parents in Prison

Since 1991, the number of children with a mother in prison has more than doubled, up 131%.

More than 70 percent of women in prison have children.

26. Even before a mother’s arrest and separation from the family unit, many children will have experienced emotional hardship associated with parental substance abuse and economic instability.

27. While a parent is incarcerated they may suffer additional trauma, anxiety, guilt, shame and fear.

28. More than half of mothers in prison have no visits with their children for the duration of their time behind bars.

29. Children are generally subject to instability and uncertainly while their mothers [or fathers] are imprisoned.

30. Due to drugs and crime, victims suffer and people die including people in custody.  Source: https://www.bjs.gov/index.cfm?ty=atoz#d